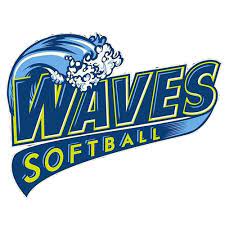 Big thank you to Zeena, Maria, and the rest of the staff at the Backstop for having us come in and perform a team testing day recorded by rapsodo devices. The waves had a talented group of girls that consisted of 19 athletes getting measured for hitting as well as 4 athletes for pitching. The Backstop has 5 tunnels for hitting, 2 tunnels for pitching and an open area for fielding drills next to the gym. We started the day recording hitting metrics in one tunnel while BP pitching was being handled by coach Maria. Between hitting and pitching, the athletes took turns at fielding in the open area followed by a warm up to get them ready to pitch. You can find the results of the day on our website here. Any coaches looking for video on each player can contact our Director of Player Development, Tim Lombardi at tlombardi@firecrackersports.com

Gabriella Cunha showed up this afternoon, grabbing the one spot at 54 mph peak velocity followed by a 53 mph average velocity on her fastball. The 2022 graduate’s other pitches included a changeup velocity averaging at 42 mph, curveball at 54 mph and riseball averaging 52 mph. Look for her to make improvements this spring!

Emily Raleigh had an impressive showing this afternoon in Warwick for the waves, averaging a fastball velocity of 51 mph while peaking at 53 mph. The junior pitcher also has an excellent repertoire consisting of changeup at 40 mph, and riseball at 48 mph.

Arcand’s impressive consistency in the zone was backed up by a fastball topping out at 51 mph. Her average is close by, reaching 50 mph proving that her mechanics are repeatable. The 2025 grad also throws hitters off balance with her 35 mph changeup and 49 mph drop ball.

The young pitcher did well this afternoon, reaching peaks of 48 mph. Graduating in 2024, Hospod also throws a changeup speed of 38 mph, drop ball of 46 mph and an impressive rise ball at 45 mph. Look out for Zosia to keep improving throughout her highschool career.

Maura led the day in hitting velocities coming in at a peak velocity of 73 mph, her stance allows her to get mobility to efficiently launch forward while in the box. This higher than average exit velocity was backed by an average distance of 80 ft at a launch angle of 6.1 degrees.

Coming in at a close second is the Waves first basement, sitting at an average exit velocity of 62 MPH. Although she sits in second at 71 mph peak exit velo, her launch angle of 18.9 degrees allowed her to average an impressive distance of 128 ft.

Kathryn Motta begins in a wide stance, allowing her to gain momentum moving forward. Her fantastic transfer of weight allows her to pop a peak velocity of 69 mph. The Outfielder for the waves created a launch angle of 15.5 degrees, allowing the velocity to carry the ball for an average distance of 110 ft.

The 2022 grad from the waves plays Pitcher, shortstop and third base. A very top heavy swing produced a peak exit velocity of 69 mph. There is a ton of velo left on the table because of the lack of leg involvement. Nonetheless, Raleigh averaged a 56 mph exit velocity while keeping the ball at 21.4 degrees.

Cunha, a 2022 grad playing for the waves at outfield and pitcher, peaking an exit velocity of 65 mph notched her in the top 5 on the day. Following her high exit velocity was an average distance of 112 ft on her 15 recorded pitches.